The Center of Urban Pedagogy (CUP) is a nonprofit organization whose ultimate goal is to make legislation, government plans, and other public policies and state regulations which could affect urban issues, more understandable and accessible for vulnerable communities in New York City.

The CUP was created in 1997 by graduate students of different disciplines with a notable variety: arts, architecture, public policy, graphic design, among others. Initially, its scope was more academic than political but after some years the organization started to focus in social justice and popular education.

The main two programs developed by the CUP are Youth Education and Community Education. The first one works with high school students in low-income communities, whereas the second one works with grassroots organizations. Inside the Community Education Program one particular project is described in this chapter of Concurrent Urbanities. Envisioning Development Toolkits, which is used by organizers to train community members about urban development issues. 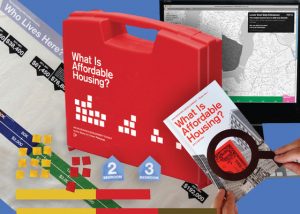 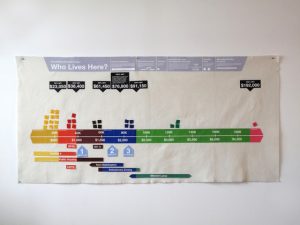 The “knowledge” is the main value that these toolkits provide in terms of epistemology since that is the asset that CUP tries to build in order to make public policies more effective for the most vulnerable communities. The hands-on, visual and tactile toolkits are designed based on three decisive topics about housing policy: housing policy, zoning law, and land use review in New York City.

The example most comprehensively described in the reading by Christine Gaspar is the project to make more understandable the housing projects in New York City, called What Is Affordable Housing? In this initiative, the main goal is to help “a number of urban communities to understand the complex technical aspects of current housing policies” (Gaspar, 2016:77).  The components of this particular toolkit are: a guide, a wall chart, and an interactive online map.

One of the issues about public housing policies is that most of the citizens do not know what “Affordable Housing” means. The Department of Housing and Urban Development (HUD)’s definition takes into account two factors. The first one, more understandable, is spending less than 30% of household income in housing. However, HUD also takes into account the median income of each city, organizing their population into different categories.

Due to this second part of the definition, community members sometimes do not know if they could benefit from a public housing plan or not. Because more than a half of renters in New York City pay more than 30% of their income in rent, the affordable housing programs become a key policy for New Yorkers. This article has interesting data (StreetEasy, 2016) about what percentage of income is spent in different boroughs of New York City and why affordable housing policies are a necessity.

Facilitators and community organizers have to find different available programs for each income level and to investigate what information participants already have. During the CUP workshops, the discussion about different types of affordability housing plans helps the community members to get a better understanding of housing policies and its effects in their daily lives.

What Is Affordable Housing? from the Center for Urban Pedagogy on Vimeo.

There are three groups of participants in the CUP’s workshops: local communities, visual thinkers and CUP staff. The toolkits, which are meant to cultivate and distribute intelligence in order to ensure real impacts in the community, have four phases.

// The first one is the research: there is an exhaustive search for information about the topic, and then is presented in a visual form to target audiences. Afterwards, the gaps in the information are defined, and then the local community is presented with the tactile elements of CUP’s toolkit.

// During the second phase, workshop development and testing take place in order to more clearly define the toolkits and the mechanics of the workshops. It is this stage when content and design find each other to improve the tool.

// Finally, in the phase of design and production, the toolkit is packaged and produced, which mean that the tool now has a concrete form with a set of tactile components, a guidebook of policies and instructions for the workshops. In the case of What Is Affordable Housing? the CUP developed a digital interface  (an interactive map with data) which helps the community members with smartphones to access the information in an interactive platform.

The main strength of this initiative is that has a real impact on vulnerable communities’ understanding of public policies for affordable housing. If the quote “knowledge is power” is true, the tools developed by CUP have a great commitment to empowering local communities in New York through interesting tactile toolkits. Moreover, the way the workshops and the tools are built is not hierarchical, which allows the emergence of interesting outputs.

However, CUP does not describe the process they follow to recruit the different stakeholders that take part in the workshops and to develop their tools, so we do not know if the mission of the CUP is fully accomplished. Finally, the CUP web page and the interactive map developed could be extremely useful but they seem not to work perfectly, which could be an additional frustration for its potential target population.