The Center for Urban Pedagogy (CUP) has been “making public policy and urban planning accessible to the residents they impact” in New York for the last 20 years. Over those two decades CUP has fine tuned their process and methodology and become prolific in their output of community and youth education tools. CUP uses design to translate hard-to-understand policy into something that can be used by community members and leaders to better advocate for their needs. They focus their work on historically underrepresented communities and aim to increase “meaningful civic engagement” as well as more effective democratic participation.

The Center for Urban Pedagogy’s methodology is collaborative to its core. For each new project that CUP takes on, CUP staff serve mostly as researchers and facilitators between designers and community organizers or advocates from the neighborhood or topic the project is engaging. Projects range in scope and medium, but for our purposes, we’ll focus on CUP’s Public Access Design projects, which result in a toolkit and workshop structure. The process is split into three phases. The first is the research phase, which involves a deep dive by CUP Staff into whatever policy is being explored. This research is compiled into a rough presentation that is tested with the target audience (both community members and advocates), and information that is unclear or missing is clarified and added. As the information begins to take shape, CUP begins introducing tactile elements into the rapidly iterative testing process. Over a period of several months and dozens of rounds of testing with community members, the tactile elements and testing results become the realized toolkit and workshop strategy. At the same time, content is written and designers are brought in to fine tune and clarify the toolkit and workshop. In the end, Public Access Design projects include a branded toolbox, a set of tactile components, a guidebook with policy information and detailed workshop instructions. 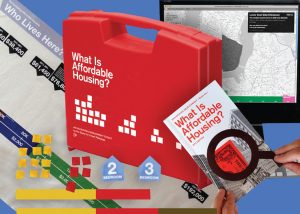 The goal of CUP’s toolkits, posters, brochures, and workshops is certainly the spread of knowledge. It seems that CUP wants to co-create “smarter” communities. While I’m not sure CUP would consider their work aligned with the ethos of smart cities, I do think their definition of smartness and intelligence has some surprising overlaps with those in the smart city movement. If smart cities are meant to take complex data and translate it into more efficient management and interaction with the environment… then perhaps CUP isn’t so far off from this. Their goal is to take complex concepts and policy and translate it into language that allows people to better navigate their environment and advocate for their needs. The differences arise when we start to look at process. CUP’s focus is entirely grassroots. It aims to work from the bottom up and speak truth to power by arming everyday people with the knowledge they need. Smart cities feel much more top down- crunching numbers somewhere behind the scenes and then spitting out strategies for maximum efficiency. CUP’s idea of smartness is the ability to understand (and retain) information about one’s environment in such a way that one can positively affect it. 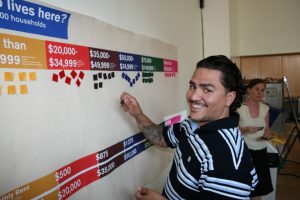 One of CUP’s greatest strengths is its focus on collaboration at every step of the process. Without strong collaboration the process could feel much less grassroots and far more top down, but CUP works to partner with trusted and invested community advocates, which only adds weight to the work that they are doing and ensures that it will actually be used. Part of what makes their work grassroots is a dedication to co-creating “intelligence”. I was pleased to read that during CUP workshops, participants are often asked to contribute their specialized knowledge of the area. Going into a neighborhood that is not your own and purporting to be an expert can be insulting and detrimental to efforts to collaborate. It seems as though CUP does a good job of both offering knowledge and giving space for participants to contribute theirs.

I believe CUP to be very effective at what they do, but I think they lack proper metrics to prove this. Tracking impact of projects like these can be very difficult, but CUP should work to do better in this area. I was able to visit CUP’s offices a few weeks ago and asked them about how they measured success of a project. The only real metric they could offer was distribution of their toolkits, posters, brochures, etc. The spread of knowledge for the sake of it is a worthwhile venture, but if CUP believes (and claims) that their work creates social change, I’d like to see some kind of proof of that. Does a better informed public actually affect policy? How might a better community-wide understanding of urban planning change the built environment? These are questions that I’d hate to be tasked with answering, but after 20 years of this work I think CUP must begin digging in (and maybe they have).