Adam Rothstein’s piece called The Cities Science Fiction Built takes a look at many of the science fiction films and books in Western media. He attempts to show how exactly the spaces created in these narratives derive from our own current cities, or very specifically attempt to counter them. He provides a lot of different examples, but the one I would like to focus on is the space described in the movie The Fifth Element. Rothstein uses this movie as an example of science fiction taking aspects of a city we know well today and keeping that essence in a fictional future with many new changes. He points out that the film still includes fire escapes that would not seem to serve much of a purpose so high up, since the skyscrapers have gotten so tall. In fact, I think it’s safe to say fire escapes are pretty useless even now. Exterior fire escapes ceased to be required after the 1968 building code. Their existence now and in the film seems to be based on something that most people just naturally associate with New York City. So it would seem that the creators of this future New York felt that taking away these details that have made New York recognizable as New 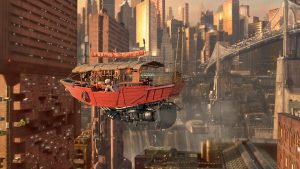 York would not be helpful to the growth of the city, even 200 years down the line. So I wonder: how important are landmarks and iconography to a city? Is it worth it to keep details that serve no utilitarian purpose anymore for the sake of recognition? Is it progress vs. cultural history, or can they live in harmony? According to what is shown in the movie, they seem to live in harmony. Rothstein mentions that apart from the futuristic gadgets, the main character’s apartment is distinctly New York, and so is the building architecture and facades outside. This version of an intelligent space seems to believe in marrying the future with the past. But what about the present? Does this version of New York include a brunch culture and Shake Shacks? How do you decide what is important enough to keep and what can be discarded or rebuild bigger, better, faster? I suppose it could be those things that people associate most closely with the city, but is that what people from the outside looking in are associating with it or the actual people living in the city? Who’s version matters?

Intelligence in the Fifth element involves self-making beds, improved coffee maker
s, flying cars. It is the intelligence of utilitarian items. People seem to have similar mannerisms, emotions, reactions to the present. People haven’t changed, just the items around them. In a way, the city is also given this personality that therefore never changes. It has gained extra utility, it has been added to and improved upon, but it stays the same in terms of it’s character.

I would say the areas The Fifth Element doesn’t explore is the reality of these decisions to keep the character of New York alive. Would it be so simple as to just build on top of what is already there? It seems like it would be an immense struggle to have changed so much and still keep the essence of the city the same. This is clear today from just looking at areas in Brooklyn vs. 10-15 years ago. The Williamsburg and Bushwick of today are not what they once were, and most of their current residents either have no idea what it was or have forgotten. Gentrification is a real problem and understanding how to walk that tightrope between progress and wiping out what is currently in a space is something that was not addressed in the space created for The Fifth Element.