Developed by the cooperative enterprises Urbanscale and Nordkapp, Urbanflow Helsinki is a proposed interface synthesizing both spatial and digital ecologies in Helsinki, Finland’s capital and largest city. The creators claim that their audience comprises both tourists and locals, and that the interface encompasses a multitude of ecological gauges and navigational assistance tools. It features an egocentric direction; a user sees a series of rings surround the location of each terminal, highlighting shops, parks, and other venues within a five, ten, fifteen, and thirty-minute walk of the terminal. Within these circles we see collective ratings from opinion-based forums (like Yelp), as well as real-time ecological diameters such as wind speed, air quality, and noise pollution. Another focus of Urbanflow Helsinki is to facilitate traveling and way-finding through global positioning systems, allowing travelers to strategically plan their day’s route, identify optimal pathways, and even purchase physical transit tickets.

Most interestingly these interfaces, positioned throughout the city in regular intervals, will act metaphorically as personalized “guide posts” to assist tourists in traversing the city. Picture E.T. with Reese’s Pieces, where the the device is the center of the tourists’ attention. It guides them, but in drawing their attention, it also potentially blocks their focus on the surrounding area.

The project is a synthesis of different intelligence meters. Conceiving of users as both the consumers and providers of data, Urbanflow Helsinki is a platform for intuitive interaction between the city and its citizens. The system’s basic temporal and spatial orientation is derived from global mapping systems, but its capacity as a user-centric interface derives from citizen-generated data on popular restaurants or venues, as well as environmental gauges detailing real-time air flow and temperature. Urbanflow Helsinki relies on a feedback loop between the users and the city to function. The project also frames “intelligence” and “smartness” by its intuitive interface as well as its ability to visualize typically ambient and invisible data in an appealing, stream-lined manner. Finally, with user contribution, Urbanflow Helsinki allows city officials to more efficiently identify pot holes or traffic congestion, as each terminal will give the user the ability to inform the city of infrastructural stresses. For the user, the city is optimized and available at their fingertips. The aim of Urbanflow Helsinki is the seamless integration of “web, mobile devices, maps, and urban screens, no matter where you are or intend to be” with the design mantra of “attract”, “inform”, and “encourage”.

The format of Urbanflow Helsinki is successful in its projected execution. The interface is interactive, engaging, and intuitive. It provides detailed environmental metrics and uses attractive graphics. It allows the users to interact with the city; it uses data to direct their physical navigation. The terminals, while curious totems like Google’s own LinkNYC or the monolith in 2001: A Space Odyssey, provide engaging directory posts to make the traveler more synchronized with the streams and flows of the city. It functions as a more people-focused, position-oriented technology with functions to encourage traveling by foot to enhance the Helsinki urban experience. 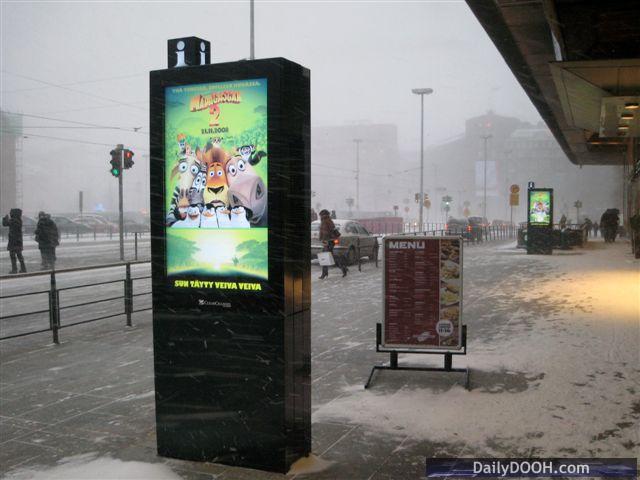 A critical dimension of Urbanflow Helsinki which was subversive in its promotional video and website is its audience. Claiming several times to be intended for both tourists and locals, the interface seems more biased towards guiding tourists through the city, rather than assisting the local population; this preference in effect prioritizes tourism by promoting the parks, popular stores and restaurants. It helps the tourist become the local. In addition, the kiosk presents security risks: onlookers could potentially see the direct travel path of one’s trip to the city by looking over a user’s shoulder from a short distance behind.