What do we, as urban dwellers, stand to lose in the age of the hyper-efficient smart city? As our interactions with our environment and our neighbors become seamless, how are our experiences in the physical city and our conception of community affected? Inspired by Chantal Mouffe’s concept of agonistic pluralism, Eric Gordon and Stephen Walter’s design value of meaningful inefficiencies, the tenets of psychogeography, and the aesthetics of wabi-sabi, we have developed spatial interventions that disrupt efficient flows through the smart city. Our goal is to encourage alternative interfaces with the environment and foster the interactions between community members that create and sustain a democratic urban experience. 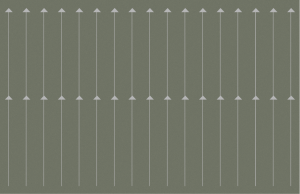 Smart cities and space for agonism

One of the key aims of the smart city movement is efficiency. This aim is admirable and advantageous when applied to systems (transportation, waste, water) but becomes problematic when applied to people and communities. Smart city ideology functions on the idea of streamlined and seamless efficiency, but community is inherently messy, and a homogenous efficiency mandate leaves little room for contestation.

In The Democratic Paradox, Mouffe warns that a “well-ordered society,” one whose aim is consensus, erases the place of the adversary, thereby expelling any opposition from the democratic process. She calls for a society based on “agonistic pluralism” – a relationship between adversaries (friendly enemies) who share a common space but feel it should be managed in different ways. Agonism safeguards against consensus and creates space where “confrontation is kept open, power relations are always being

Agonism, messiness, and the unexpected are cornerstones of democracy. They are also essential to the urban experience. In her often quoted work The Death and Life of Great American Cities, Jane Jacobs states, “The ballet of the good city sidewalk never repeats itself from place to place, and any once place is always replete with new improvisations.” [2] These improvisations stand to be lost when urban dwellers mesh seamlessly with the smart city interface. 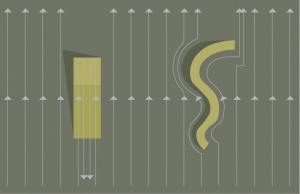 In the face of the smart city, we propose a counter-narrative to preserve and strengthen democratic space and process in the form of spatial interventions. By designing meaningful inefficiencies in the built environment, we highlight the inefficient, the unpredictable, and the unexpected in a society where the smart city paradigm has become dominant. Meaningful inefficiencies aim to create a time and place for play, disorder, messiness. [3] According to Eric Gordon and Stephen Walter:

An inefficiency becomes meaningful once it either provides a respite from efficiency, [where citizens share in a give and take of experience and increase their range and perception of meaning with each other], or when it provides a new view of the efficiency, where citizens are able to more fully understand how they are being shaped by the system- or how they might in turn be able to shape it.

It is this understanding of how people are shaped by the system that we aim to foster through disrupting the movement of people through space. In a city where flows are monitored and tracked, our spatial interventions create a moment for people to stop, redirect, and consider their built environment, particularly the seams and imperfections of space.

The objects themselves are influenced by the psychogeography movement. Psychogeography, the study of the “effects of the geographical environment, consciously organized or not, on the emotions and behavior of individuals,” [4] as well as other concepts (such as the Derive) created by the Situationist International, has informed our thinking about the alteration of movements through space. We believe that the seamless city will have negative effects on human emotions and behaviors, and that, by forcing urban dwellers to questions their hyper-efficient routines, we can foster new interactions and create democratic moments. 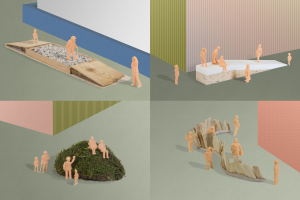 The spatial interventions are a protest against the smoothness, the seamlessness and hyper-efficient aesthetic of the smart city. Drawing inspiration from the Japanese tradition of wabi-sabi, also known as “the art of imperfection,” which states that the beauty of objects lies in the imperfect, impermanent, and the incomplete, our objects consist of natural and scrap materials — interfaces that are unexpected in a hyper-efficient environment, and that celebrate ‘seamfullness.’ The objects aim to surprise, excite and re-direct. The curved wooden wall diverts pedestrians from their path, while the ramp to nowhere forces people to turn around or decide to climb down. All objects also have a distinct materiality that creates an unexpected interface between human and the built environment. The zen garden makes one slow down and inspects why the ground suddenly feels different and a bit unstable. The ramp, made of a soft foam that absorbs one’s steps, has a similar effect. The moss heap invites passersby to linger and feel. By disrupting pedestrian’s efficient routes, we create moments that foster interaction and reflection and invite people to question their interfaces with each other and their environment.

The advantages of living in a city- proximity to infrastructure, resources and other people,  are seemingly lost in its own hyper-connectivity. These five spatial interventions are physical disruptions to the seamless and hyper-efficient urban flow. Not only do the interventions disrupt our shared data patterns, they also challenge our own data infused lives. By drawing on meaningful inefficiencies,  psychogeography, and wabi-sabi, we hope to bring attention to the way data and invisible interfaces are seemingly defining our urban future and the individual’s experience of the city. It is in these spatial interventions and meaningful inefficiencies that we hope to prompt interfacing and interaction between city dwellers with each other and the built environment. 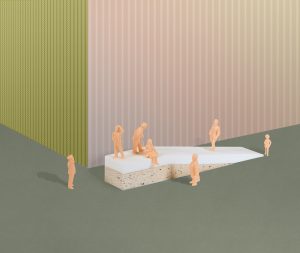 [4] Debord, Guy. “Introduction to a critique of urban geography.” Critical Geographies A Collection of Readings (1955).