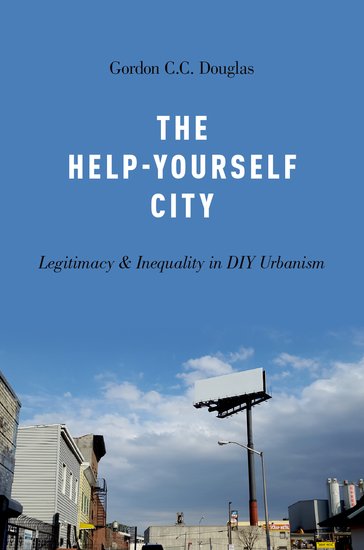 Logistics + RSVP on the Institute for Public Knowledge website

NYU’s Institute for Public Knowledge invites you to join for the launch of Gordon Douglas’s The Help-Yourself City: Legitimacy and Inequality in DIY Urbanism. The author will be present in conversation with Caroline Lee and Harvey Molotch.

When local governments neglect public services or community priorities, how do concerned citizens respond? In The Help-Yourself City, Gordon Douglas looks closely at people who take urban planning into their own hands with homemade signs and benches, guerrilla bike lanes and more. Douglas explores the frustration, creativity, and technical expertise behind these interventions, but also the position of privilege from which they often come. Presenting a needed analysis of this growing trend from vacant lots to city planning offices, The Help-Yourself City tells a street-level story of people’s relationships to their urban surroundings and the individualization of democratic responsibility.

Gordon C. C. Douglas is Assistant Professor of Urban Planning and Director of the Institute for Metropolitan Studies at San José State University. He is a multidisciplinary urbanist whose work sits at the intersection of urban political-economy, community studies, and cultures of planning and design. Prior to joining the Dept. of Urban and Regional Planning at San José State, he was the Rebuild by Design Postdoctoral Fellow at New York University, where he also served as Associate Director (2015-2016) and Acting Director (2016-2017) of the Institute for Public Knowledge.

Caroline W. Lee is Professor of Sociology in the Anthropology & Sociology Department at Lafayette College. She is a comparative institutional sociologist with research and teaching interests in the following areas: political sociology, social movements, economic sociology, law, sociology of knowledge and culture, urban and environmental sociology, and research methods. She is the author of Do-It-Yourself Democracy (Oxford University Press, 2015) and an editor of the volume Democratizing Inequalities (NYU Press, 2015).

Harvey Molotch is Professor of Sociology and Metropolitan Studies at New York University. His writings focus on cities with special attention to economic development, urban security, artifacts, and product design. He is the author of several books including Against Security: How We Go Wrong at Airports, Subways and Other Sites of Ambiguous Danger (Princeton University Press, 2012), and Where Stuff Comes From: How Toasters, Toilets, Cars, Computers and Many Other Things Come to Be as They Are (Routledge, 2003).