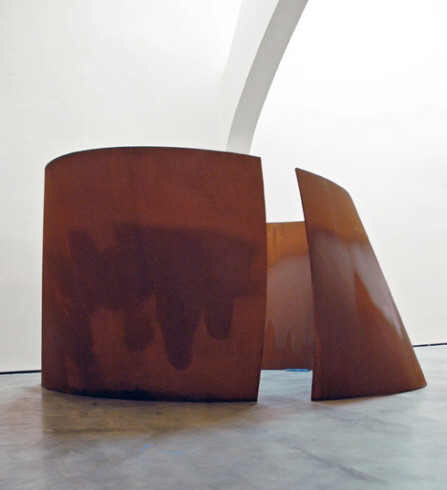 Contagions swarm not through grounded history, but through oxidants in the air that accelerate upon communicated contact: information becomes viral, and the mediums that render it possible become protocol. Not unlike many scenes: Frank Gehry, known for a few buildings, shows new late 80’s CATIA computer software to the then-minimalist sculptor Richard Serra, materializing in Serra what was previously a geometrical fantasy by actualizing a new material form. “Torqued Ellipse” is the name of a decades long engagement of Serra’s artwork (still today at Dia:Beacon, a few miles north of us), yet also a form not found in nature or architecture – synthetic, synchronic, out of place.

As a formal invention, it is recognized by its “curvalineararity” – impenetrable corten steel becomes malleable under physical pressure and digital code. The impossibility of this form is not its contrived viscerality – or that which suggests its aesthetic importance – but of its literal grounding, standing, being: the torqued form is emergent insofar as its material production operates along a similar metric. Parametric design is that which supplements human inadequacies with algorithmically rendered capacities, that which are previously unthought. Approaching industrial steel for its natural proclivity to mass, counter balance and gravitational load, these installations become environments of their own, suspect to similar bodily tropes of weather, decay, oxidation. Yet their longevity is supported not only by atmospheric conditions of the museum and the curation, but concordantly by human design and parametric tools.

While Zaha Hadid’s constructs appear floating, ethereal and buoyant, Richard Serra’s Torqued Ellipses are grounded by gravity and mass, yet still lofted by a curvilinearity that doubles back, elastically bends, on the subject; as continuous as it is are striating. While the outside’s peripheral angle is indiscreetly formless and not imposing an end, the inner concave side is entirely subsumptive and encloses a full entrapped optical field. Accordingly paradoxical, the ellipse on the ground and the ellipse in the sky is equivalent. 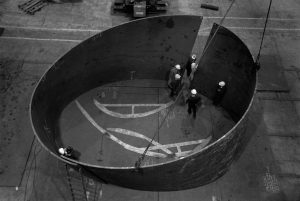 Serra’s work is visually queued as industrial rust, massive corten steel plates occupying site specific installation. Decaying and inert structures that circumscribe the world and the human’s place somewhere arbitrarily within. Although rust simulates decay, a minor conceit throughout the artwork of Serra is that his works are not even proto-naturalist, but are machinicly construed, simulated earth-work, through CATIA software (computer-aided three-dimensional interactive application), largely popularized in the field of architecture by Frank Gehry.

CATIA optimizes on many levels: price, time, speed, etc. Serra (and Gehry +Hadid co.) continues to use it, with his Torqued Ellipse for example, by re-inventing tools to metricize internal volume that can withstand the physicality. CATIA is cross applicable to other mediums, used in conglomeration with IBM, Boeing, Windows, Linux, etc. A steered universalism guides this software, translating its use function variably across applications. (correspondingly, Frank Gehry was among the first architectural heads to utilize computational software to render and assist the development of buildings.) 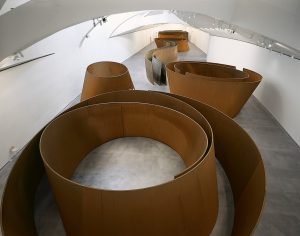 Serra “invents strategies that allow to see in a way that they haven’t seen before in a way to extend their vision… ways of informing themselves by inventing tools, techniques, process that allow them to see into a material manifestation in the way that you would not if you dealt with standardized or academic thinking” (Serra interview)

Rather than arguing of the primacy of the computational design, Luciana Parisi argues that the design renders formal impossibilities, possible, through the control of code: parametric techniques within the field of digital design specifically involve the use of scripting languages that allow designers to step beyond the limitations of the user interface, and do their design work through the direct manipulation of code rather than form. (Contagious Architecture: Computation, Aesthetics and Space, pg. 265) A certain discordance accompanies these earthworks and floating utopias alike, that which is irresolvable alone by either human or machine, yet dependently comitant. Parisi understands these relational conditions as instances of mishearing and misunderstanding, never not deployed in the computational organization of algorithms (Parisi, 171)

Serra’s sculptures are intentionally not a direction for future urban intelligence, relegated to the aesthetic realm of sculpture, deliberately not useful, excessive and wasteful. But one can start to delineate ways in which the city can incorporate these earthworks into a landscape of the future, countering the present wills to transparency, immediacy. Insofar as Serra’s sculptures are obstinate, opaque and non-transparent, there are potential regimes of signifiers to be deployed: invoking fundamentally antagonistic values to the present illuminative city. Perhaps the city of right angles has reached its limit…